Become a Knight in Medieval Times and Fight With King Arthur: My Review of Galen Wolf's Camelot Overthrown 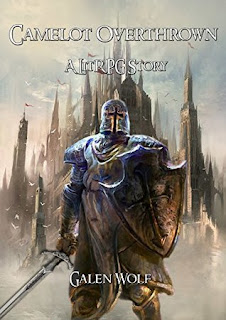 If you’ve ever pictured yourself as a knight in King Arthur’s Camelot, Galen Wolf’s latest LitRPG novel may be just for you. LitRPG novels are of course all about following a character or set of characters as they progress through a virtual reality game setting. In Camelot Overthrown, Wolf turns his attention to knights and chivalry and churns out a virtual reality manifestation of medieval England. The prolific LitRPG author invites his readers to follow a young Level 1 up-and-comer named Gorrow on his quest for wealth and glory.

All is not well, however. Gorrow must climb from poverty to wealth and from obscurity to fame in the midst of a war-torn world. The forces of evil (and they are thoroughly evil – more on this in a moment) are sweeping across the land and closing in on Camelot, the kingdom’s main bastion of freedom and hope. Wolf’s game world allows players to join King Arthur and fight against evil — or align with evil and seek to overthrow Arthur’s fabled Camelot. Gorrow and his friends choose the former, and readers are treated to the delight of meeting (and fighting alongside) the legends of Camelot, including Sir Gawain, Sir Lancelot, and Arthur himself.

Wolf isn’t afraid to play up cliches. The baddie of all baddies in this novel is named… wait for it… Satanus. Wolf actually incorporates quite a few Christian concepts into his novel, making them part of the game. Not only can a character drink a health potion to heal (a common trope in role-playing games and LitRPG novels), he or she can also pray. That’s right, prayer is an in-game action with mathematical advantages to one’s health stats. Reducing Christian concepts to cliches and game mechanics doesn’t altogether sit well with me (seeing as how I, as a Bible-believing evangelical, take Christianity very seriously). Nevertheless, Wolf avoids showing any outright disrespect to or hostility toward Christianity. In fact, the “Christians” in Camelot Overthrown (albeit as defined in-game) are quite clearly the good guys. This is somewhat refreshing compared with other literature out there.

As a history buff, I love Wolf’s combination of Arthurian mythology, knights-and-armor warfare, crafting and empire-building. Rather than focus on just one path of character development, Galen’s protagonist chooses to become both warrior and blacksmith. He becomes a squire and (minor spoiler) a knight while also building up a small village and mini-trade empire.

And as for the setting, what fan of history doesn’t appreciate a good King Arthur story? And the LitRPG angle allows the reader to fully immerse himself or herself into Arthur’s world. The scene where (spoiler warning) Gorrow sits at the Round Table was particularly cool. I couldn’t help but crack a smile.

Unlike most other LitRPG novels I’ve read, Wolf spends hardly anytime in the “real” world. He doesn’t try to contrive any real-world stakes for the virtual reality game. He all but ignores the real world, and just immerses you in the game itself. And hopes you’ll care enough about the game and the game players, on their own in-game merits.

The story is very simple, but enjoyable. At a few points, I thought Wolf would develop his characters a little more fully or introduce some side plots, but he leaves those teasers and plot threads dangling (at least for now) and keeps things focused on Gorrow’s advancement. Some readers may prefer a more sophisticated and nuanced story, but Camelot Overthrown is somewhat refreshing in its simplicity. It’s an easy read. And, sometimes, that’s all you need.

Camelot Overthrown is in need of more editing. There are spelling errors, grammar issues, and formatting issues throughout. More editorial polish would also be appreciated. Given the number of books Wolf has turned out this year, it seems he may be going for quantity more than quality — at least in terms of editing. Still, the story itself is just fine. Simple. Not elegant by any means. But enjoyable all the same. Camelot Overthrown may not win any literary awards, but it entertains the reader. And, in that, it succeeds in his purpose.

If you enjoy the LitRPG genre or appreciate the legends of King Arthur, I encourage you to give Camelot Overthrown a try.
Posted by Brian Tubbs at 8:00 AM