A Devoted Husband Struggles to Save His Wife via a Dark Virtual Reality Game: My Review of Stan Faryna's Dystopian Novella Francesco Augustine Bernadone 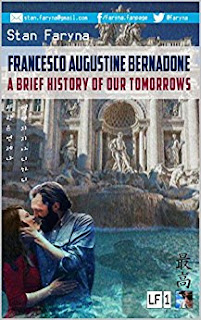 Stan Faryna’s Francesco Augustine Bernadone: A Brief History of Our Tomorrows centers on an 80-year old Italian named Francesco as he desperately seeks to finance his wife’s cancer treatments, battles multiple sclerosis himself, and struggles to hold onto any work he can. All in a bleak world devoid of much happiness and hope. Francesco’s selfless devotion to his ailing wife, Clare, is about the only bright spot in the dark dystopian story world painted by the author.

Francesco Augustine Bernadone is the first of a planned series of novellas set several years into an imagined future where the Dollar and Euro have collapsed, and western society has plunged into a gritty existence of unemployment, poverty, struggle, and despondency. To escape this grim reality, people are buying their way into a virtual reality game called Jacob’s Ladder. The massively multiplayer role-playing game (MMORPG) is, in many ways, even darker than the real world itself. Yet, for those few who can survive for any length of time, Jacob’s Ladder promises possible windfalls of cash that can help better their condition in the real world. When Francesco is laid off from the last of his three part-time jobs, he is a man with few prospects. He decides to give Jacob’s Ladder a try.

Faryna does a great job creating a highly immersive story world and drawing the reader into it. And then…before you know it, you’re plugged into an online, virtual game world as well. Both worlds – the dystopian world in which the characters live and breathe as well as the MMO game world – are convincingly described.

The novella is difficult to classify as it crosses genre lines. Broadly speaking, it’s certainly within the science fiction umbrella, but there are elements of horror, fantasy, LitRPG / GameLit, and spirituality as well. That breadth is a reflection of the story's author. Stan Faryna is an author, blogger, gamer, successful entrepreneur, technology expert, and an online strategist. He’s done business extensively both in the United States as well as Europe. He studied philosophy in college before drifting into the IT arena and entrepreneurship. He counts gardening as among his hobbies, and is strong in his Christian faith.

The story jumps around a bit. It doesn’t actually begin with Francesco, but with a woman named Penny and then her son Roberto. Just as you get attached to one character, especially at the beginning, it jumps you to another. He also plays with chronology a bit (as many authors do), but this (combined with the character-jumping) can make things a little confusing at times.

The characters are, however, well developed – especially Francesco. Faryna’s world-building is quite good. The settings are compelling. The game world is believable. And he does a great job setting up contrasts and ironies within the story as well as dropping in symbols and what some call “Easter eggs” to make readers think. And…Faryna encourages the reader to confront some worthy questions, like how much one should compromise or sacrifice for a noble end.

The story is darker than what I normally like, but I still give it high marks due to the quality of the writing and the importance of the themes that Faryna causes the reader to confront. For these reasons, if you’re an adult (or at least a mature teenager) and can handle some darker elements in your reading, I recommend you give Francesco Augustine Bernadone a try.
Posted by Brian Tubbs at 8:00 AM