A Young Man Battles Monsters and Saves Women in a World Ripped From the Series Lost: My Review of Island Jumper 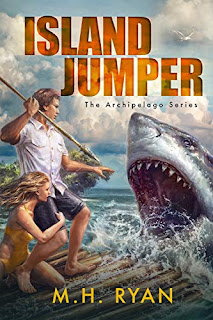 Ryan's novel features a young male protagonist rescuing and fighting alongside an ever-growing number of bikini-clad sorority coeds. It's exactly the kind of adventure any young man (and even some older men) would fantasize about starring in. This is male fantasy through-and-through.

Here's what the book description on Amazon promises...

Islands to find
Sharks to fight
Women to rescue

Jack Sawyer takes a sorority on a party boat tour when a mysterious storm slams into them. Now, they are stranded on a chain of strange islands with bizarre creatures that have an unsettlingly desire to kill them.

He must learn how to survive the elements by building rafts, shelters, and weapons from what they find on the islands, all while fighting for their lives. They can't stop, though--there are more women to rescue and more islands yet to be explored, plus that whole let's-get-rescued plan.

As someone who loves stories with action, adventure, crafting, and strategy, I'm finding the Archipelago series quite fun -- albeit with serious objections to some of the content. And it's that latter part that gets me. As a Christian, I understand that finding a non-Christian novel free of any objectionable content is challenging, but this story bends over backwards to sprinkle wholly contrived and completely unnecessary scenes designed to tease and titillate the mind. There were at least three scenes I had to skip over.

Not only might this book offend some Christian readers, elements of the story will for sure offend feminists driven by "social justice" concerns. Here's such an example...

"You're so smart, Benji said. "We're so lucky to have you here."

"Oh my God, Benji," Aubrey said rolling her eyes. "I think you've got his attention already."

"I see the way he looks at you," Benji said.

"Well, he looks at you the same way. He's plenty interested in us; you don't have to go buttering him up like that," Aubrey said.

"I'm not..." Hints of color reached Benji's cheeks as she looked away from Aubrey. "It's just I'm not  used to a manly figure in my life, and he's saving us."

Even though I'm not into the whole SJW political correctness thing, I must admit that this was a wee-bit cringe-worthy.

In spite of some of its cringe-worthiness, the objectification of the female characters, the sex scenes I had to skip over.... I kept reading the story itself. Why? Because I love the action and the adventure. And, as I said, the crafting and the strategy. And I find the unfolding mystery compelling as well.

It's frankly difficult not to enjoy this story -- at least if you like survival-themed stories with action and adventure as elements of strategy and crafting.

That's why it can best be called "a guilty pleasure." And if you feel so inclined to indulge yourself, you might want to consider giving Island Jumper a try.  If, for moral reasons, you choose to stay away, that's certainly fine too. In fact, that's probably the better choice. Personally, I would prefer a G or even PG rated version of Island Jumper. There is indeed much potential.

There are now three installments of the Island Jumper: Archipelago series available on Amazon Kindle. This review only covers the first.