Journey into a Living Breathing Dungeon - If You Dare! My Review of Dakota Krout's Dungeon Born 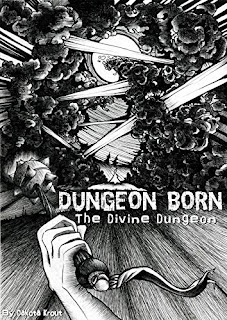 For eons, conquering dungeons has been the most efficient way to become a strong adventurer ... Several questions have always plagued the mind of those that enter these mythical places of power: Why are there so many monsters? Where does the amazing weaponry and heavy gold coins come from? Why does the very air fill with life-giving energies?

Cal has all of the answers to these age old questions, for a very simple reason. He is a Dungeon Heart, a soul forced against his will into a magical stone. After several lonely years, Cal was able to regain sentience, allowing him to form new memories while slowly growing a dungeon around himself. With help from a friend, Cal learned how to create monsters and traps, increasing his power and size quickly.

So goes the Amazon book description for Dungeon Born by Dakota Krout, the first installment of his incredibly popular Divine Dungeon LitRPG / GameLit series. A developer and programmer turned full-time author and indie publisher, Krout is the author of The Divine Dungeon series as well as The Completionist Chronicles.

The book starts with a murder -- specifically the murder of Krout's main protagonist: Cal. Not content to simply kill Cal, one of his assailants decides to steal his soul. And thus on the very first page, as the Cal's bleeding, tortured body drifts toward lifelessness, the necromancer madman makes an "arcane gesture" and issues a declaration. And then we read:

...pain shattered my confused senses - pain more traumatizing than my recent death by repeated stabbings. I found myself being forcefully drawn toward a tiny gem in his hand. I screamed as only a tortured soul is able, albeit silently to the human ear. I imploded into the small gem, which gleamed brighter by the second. The agony became more intense, interrupting all rational thought until all I knew was torment. With a final gasp of pain, I became firmly embedded in the glowing gemstone.

I don't know about you, but this lover of fantasy fiction was hooked!

Now, let me quickly say... Most of you know I'm a Christian. And so you know... I don't believe in dark magic, necromancers, soul-stealing, fairies, or any of that. But I'm able to treat fantasy as fantasy. I'm able to enjoy Star Wars without letting it influence or corrupt my Christian beliefs. And thus, I was able to enjoy Dungeon Born. And enjoy it, I did.

Dungeon Born follows Cal's transformation from sentient soul gem into formidable dungeon that "eats" adventurers. The premise is not wholly original, but Krout gives it his own twist. The mix of magic and leveling and strategy is quite intriguing. The characters are well thought out. The story world is immersive.

His secondary character, Dale, allows the reader a break from the dungeon from time to time. Dale is a naive, poor, and amoral boy who seizes the opportunity to use this new dungeon for his personal enrichment. I enjoyed following his story as well, though I admittedly wished he were a little more ethical.

That leads to perhaps my main complaint with the story. While I understand that all human beings are flawed, I still like stories with clear "good guys" and villains. I'm not sure any character in Dungeon Born can qualify as a "good guy."

The book is well written and it pulls you into both the story and the series. It's well worth your time. I encourage you to check it out, if you haven't already.