Is Aquaman Worth Seeing? My Review of the DC Superhero Film that Takes Viewers Underwater 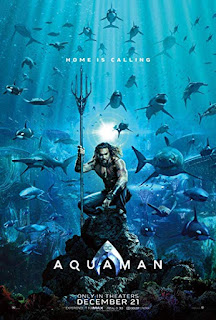 On Christmas Day, my teenage son and I decided to give Aquaman, the latest DC Comics superhero film, a try. He and I generally prefer Marvel superhero films (though we both love  the Dark Knight trilogy starring Christian Bale). Still, we felt Aquaman looked promising, so with a new AMC gift card in hand, we headed for our local theater to catch the DC superhero film in 3-D.

And today, I wanted to give my readers my take on the film. Though this blog generally focuses on science fiction and fantasy books (mainly because I want to encourage reading), I will occasionally review a film. Hence, this spoiler-free review of Aquaman.

The film stars Jason Mamoa as the title character and Amber Heard (with red hair) as Princess Mera. It's directed by James Wan. According to Screen Rant, production costs on Aquaman came in at around $160 million.

Let me start by saying that I consider myself a Jason Mamoa fan. I thoroughly enjoyed Mamoa's turn as Ronon Dex in the spectacularly awesome TV series Stargate: Atlantis. (Oh, how I miss that show!) In that series, Mamoa proved himself to be one of those rare actors who can completely dominate the camera and keep viewers engaged. While I liked all the Stargate: Atlantis characters, you could tell that Mamoa was the actor whose career would live on well after Atlantis wrapped. And that has certainly been the case.

Mamoa starred in the disappointing Conan the Barbarian remake in 2011 and was featured in the hugely popular Game of Thrones HBO miniseries. (Full disclosure: Though I love fantasy and recognize Game of Thrones to be exceptionally well made television, I have steered clear of it due to its morally objectionable content). When the DC movies incorporated Mamoa into the Justice League lineup as Aquaman, I knew it was a good match.

Mamoa is not your grandfather's or even your father's Aquaman. When I was a kid, I remember watching the 1960s cartoon version of Aquaman that featured a blonde-haired hero riding his trusty sea horse. Mamoa is not that Aquaman. And many film critics and everyday commentators have hailed this change. "Gone is the Aryan-looking Atlantean in green-and-orange spandex, replaced with a bare-chested Hawaiian super-stud with long, shaggy surfer hair and all-over tribal tattoos," declares Peter Debruge for Variety.

"There is a frisson of delight in seeing a biracial hero dominate a superhero movie," echoes Wesley Morris for The New York Times. "He’s an inspired left-field choice for Aquaman, who in the DC comic books, and the cartoons they inspired, tended to be a slab of Eagle Scout-y blondness."

As for the cast overall, I found it enjoyable to see Willem Dafoe, Nicole Kidman and Dolph Lundgren with significant supporting roles. As a fan of 1980s and 90s action movies, I especially smiled at Lundgren who plays King Nereus.

The movie features fantastic world-building, incredible action sequences, and marvelous special effects. The finale is especially intense, though it gets a little confusing at times. And, as mentioned previously, it also serves up a fairly strong cast -- though, in some cases, an underutilized cast.

Unfortunately, the movie itself has an overall underwhelming feel. The packaging is great. The content seems (at times) weak. Writing for Forbes, Erik Kain sums it up pretty well: "Instead of character development we get spectacle. Glorious spectacle. The CGI is as outstanding as it is overwhelming. Half the movie takes place underwater and they do a decent job with that, but every other scene turns into a battle. Explosions abound. Giant sea creatures are eclipsed by even more gargantuan underwater beasts." Yes, indeed. The spectacle (the packaging) is incredible. But the movie left me with a feeling that can perhaps best be described by the famous question asked by that cantankerous lady from the old Wendy's commercial: "Where's the beef?"

Morris puts it a little harshly, when he writes: "There’s no joy or wonder to behold, just comic-book movie blah-blah." While I wouldn't go that far, when my son and I exited the theater, we couldn't rate the film as being any better than "mediocre."

Much of the script was trite and predictable. Some of the dialogue was downright cringe-worthy. And the movie was just too long. Had the movie been written, directed, and edited as a 90-minute action film, it would've probably been three times better. As it was, it plodded along for 2 1/2 hours! By the time we finally made it to the end, we were more than ready to depart.

Conscientious parents and those looking for clean cinema will be disappointed at some of the language and should be advised that there is violence throughout. Writing for Common Sense Media, Michael Ordona sums up the film's moral content as follows: "[I]t's largely bloodless, but characters are beaten, impaled, and eaten by monsters, and weapons (including blasters and tridents) are used. Language is infrequent but includes 'ass,' 's--t,' and 'd--k'; adult characters also kiss and drink (once to excess)."

Many moviegoers these days are quite fine with limited character development, predictable plots, and trite dialogue. They just want action and cool effects. If you're in that group, you'll like Aquaman. Indeed, if you like superhero films in general, you'll probably find Aquaman at least passably enjoyable. If you're a Jason Mamoa fan, it's definitely something you should check out. But...

If you're hoping for a superhero movie as excellent as 2008's Iron Man (starring Robert Downey, Jr.), the Captain America film series (starring Chris Evans), or the Dark Knight trilogy (starring Christian Bale), you will likely be disappointed.

As for me, I enjoy going to the movies with my family. And my son and I both enjoy action-packed superhero films. So, a night out with him was worth it. And, if you're a parent like me looking for a good reason to hit the movies with your kid, you could do worse than Aquaman. And honestly, I've learned the most important thing isn't the quality of the film you're watching. It's about the quality of the relationship with the one you're seeing the movie with. For this reason, I was glad to go to the movies with my son. And I'm grateful to the church family that gave us the AMC gift card (as a Christmas present) to make the outing possible.

Aquaman is rated PG-13, and (as of this writing) is currently showing in theaters nationwide.
.
Posted by Brian Tubbs at 2:07 PM 1 comment: 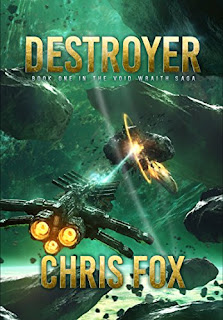 "Commander Nolan ducked through the hatch into the combat information center of the UFC Johnston." That's the opening line of Destroyer, the first installment in Chris Fox's Void Wraith saga. And there's something about that line that hooks this Star Trek fan.

It's not just that line. Fox knows the military sci-fi genre well. He hits all the right buttons and kept me riveted from beginning to end. Indeed, Destroyer is one of the few novels that I've read more than once!

The setting is simple, yet compelling. Human colonies on the edge of explored space are disappearing without a trace. The UFC Johnston, our heroes' destroyer, undertakes the task of finding out why. In so doing, they tangle with the cat-like Tigris and their own headquarters all while uncovering signs of a seemingly invincible new enemy and a horrifying conspiracy.

Nolan is the Johnston's first officer, a veteran of Fleet Intelligence who was relegated to the aging Johnston and the outer edges of space after a falling out with a high-ranking admiral. A falling out that involved said admiral's daughter. The story follows Nolan who must earn the respect of his maverick captain, a grizzled space marine non-commissioned officer, the Johnston crew, and later the Tigris as he struggles to get to the bottom of what's going on.

The novel is fast-paced and action-packed. Considering the politics and intrigue featured in the novel, it's impressive that Fox keeps the story moving at such a brisk pace while keeping the reader fully engaged - at least those readers (like me) who appreciate military sci-fi along the lines of Star Trek.

In one of his other books, Write to Market, Fox recommends that aspiring indie authors target specific reader markets and thoroughly study the tropes of their chosen genre or sub-genre. Fox practices what he preaches as Destroyer checks all the boxes. His Void Wraith saga is similar to other popular sci-fi series such as Nick Webb's Legacy Fleet series.

I can't speak to the science. I enjoy reading and watching space fantasy and science fiction, but I'm not an expert in space travel, physics, gravity, theories of hyperspace, etc. I'll leave discussion of those aspects to minds much smarter than mine. That said, from this layman's perspective, the 'science' sounded plausible enough for me to suspend any disbelief or suspicions and just enjoy the story.

Destroyer is the first part of the Void Wraith trilogy. The other titles are Void Wraith (Part 2) and Eradication (Part 3). And then the series continues beyond the trilogy with additional novels that feature a mech focus.

If you like sci-fi space action novels, this one belongs in your library. I encourage you to check out Destroyer and begin your reading adventure in the Void Wraith universe.
Posted by Brian Tubbs at 6:30 PM No comments: 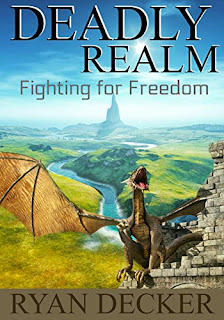 In Ryan Decker's gamelit novella Deadly Realm: Fighting for Freedom, a young game tester is thrown into a fast-paced, virtual reality world that tests not only his survival skills, but his sanity!

The story begins with Paxton Tyler selected to test out a new game that supposedly will help advance autism research. His brother is autistic, so Pax sees this a triple-win: He can help his brother, get paid, and enjoy playing inside a computer game. Pax loves computer games.

Unfortunately for Pax, it isn't that simple. And the experience is more terrifying than enjoyable. He's greeted by a tough, mean-spirited guide who claims she is trapped inside the game. Within a few pages, his guide softens and warms to him. But she's pulled away from him after the first three levels. The nature of her 'reality' is part of the story's mystery. And he faces a succession of monsters that cause him intense pain, panic, and medical crises back in the real world testing facility.

As the story itself puts it: "[Pax] thought living in a fantasy world, battling demons or beasts would be everything he'd ever dreamt of. Instead, it filled him with confusion and fear unlike anything he'd known before."

Deadly Realm is light on game mechanics and RPG elements. Those who enjoy hard litrpg (lots of charts, number-crunching stats, etc) should look elsewhere. It's also quite short. An experienced reader can zoom through this in one sitting. And while short reads are fine (at least for me), the speed with which Pax races through the levels makes the story feel rushed for no reason. The game world doesn't feel very big and certainly not very open. The short length, combined with the story's fast pace, also makes Pax seem more powerful (despite his earnest fear at times) than what the story tries to convey. And the ending is, shall we say, rather abrupt.

Definite language warning on this one. Many of my faith-oriented readers will want to take a pass. I suppose this reflects how a majority of RPG gamers talk, but I find such vulgarity unnecessary and a definite turn-off.

I personally found the story enjoyable overall, though hardcore Gamelit/LitRPG readers will likely see plenty of room for improvement.
Posted by Brian Tubbs at 6:30 AM No comments: