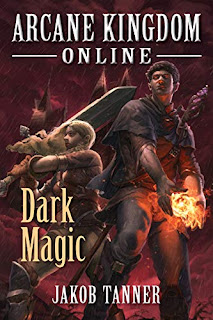 As the ZERO virus decimates the planet, Clay Hopewell and his friends have found a new chance at life in a virtual reality world full of monsters, magic, mystery, and mayhem. In Arcane Kingdom Online: Dark Magic, the second book of Jakob Tanner's LitRPG series, Clay and his companions are pressured into a quest by an arrogant teenage king -- all while this new digital world they call home is on the verge of total war and is ravaged by a strange and dangerous computer glitch.

As with the first installment, the writing quality is solid. There were no distracting typos or other such issues. That's a refreshing contrast with many of the titles out there in this genre.

The Arcane Kingdom Online series provides a compelling, thought not entirely original, premise. And the world created by Tanner is colorful and diverse. It's kind of a late medieval world liberally sprinkled with elements of magitech and steampunk. You have sword fights as well as battles between air ships. It's the kind of stuff that any fantasy nerd will enjoy.

The characters are generally well-developed, especially Shade, Clay's pistol-packing thief companion. The plot seems well thought out. The action scenes are enjoyable, though perhaps a little too gory at times for some readers.

Here's an excerpt from Dark Magic that shows what I mean:


A rip came from below. The staircase broke in two. The lower deck, along with the two smaller escape ships attached to its side, tumbled and fell in the sky towards the distant ground.

"You talk like we're in the clear," gasped Serena, pointing across the deck towards the sky.

Another two Sky Wyrms slithered through the clouds towards us.

"HOLD YOUR FIRE," yelled Sir Archades, standing at the front of the deck, clenching his gauntleted fist.

The soldiers held their positions along the crenellated deck walls, mounting their mana rifles. They each closed one eye and aimed at their target.

The new Sky Wyrms charged us from one side while the original one came from the opposite end.

The Sky Wyrms were going to smash into us at any moment.

The sky snakes were meters away. The upper deck was about to smash into a million pieces.


As you can see, the battle scenes are cool -- especially the one above which takes place in the air!

If you're looking for a novel free of any objectionable language, Arcane Kingdom Online unfortunately isn't for you. In fact, the language seems to be worse in this second book than it the first. Reading through Dark Magic, I found the foul language at times forced and completely unnecessary. This was a definite minus for me.

Thankfully, the series is free from the harem craze that is unfortunately seen in much of the RPG Lit / GameLit / LitRPG genre, but there is a 'fade to black' sexual encounter in this novel.

Some of my readers may find the dark magic in Dark Magic uncomfortable or objectionable. But this is all taking place in a virtual (i.e., computer) world, so there's no actual dark magic happening. No demonic activity. Just computer programming -- albeit very intense and believable programming.

Thus, allow me to state the obvious. Since many of my readers are Christians, the Arcane Kingdom Online series is not a Christian fantasy series. Jakob Tanner is of course under no obligation to write a Christian series, and this blog reviews both Christian and non-Christian titles, but since many of you prefer and seek out Christian books, I feel I need to say that.

Dark Magic introduces a plot element not seen in the first installment. If the zombies in the real world get to your body and destroy it, then your life in AKO is over -- in a very dramatic and painful way. This is apparently the case even if you've been fully uploaded into the game. And THAT is what I found confusing.

If your life in the game world is still tied to your physical body in the real world, then what's the point of the whole upload process?  I mean, a big deal was made about the upload process in the first book, so I found this confusing.

Having said all the above, I find the Arcane Kingdom Online series to be entertaining. I mean there are airships!

I look forward to Book Three.