A Repairman and a Modern-Day Viking Battle a Genetically Engineered Dragon: My Review of James Byron Huggins' Leviathan 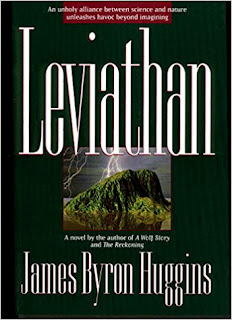 About 25 or so years ago, while browsing through the fiction section of Reston Regional Library in Fairfax County, Virginia, I discovered James Byron Huggins. The book I picked up that day was Leviathan. I've been a Huggins fanboy ever since.

Leviathan was Huggins' third published work. His first, Wolf Story, was an allegorical novel featuring wolves in a titanic battle between good and evil. His second, The Reckoning, is an action-packed thriller that will resonate with fans of Dan Brown's The Da Vinci Code. The difference is that Huggins is friendly to Christianity. Indeed, Huggins spent years in Cold War Europe, operating often behind the Iron Curtain, to help people facing religious and political persecution. Indeed, it was Huggins' commitment to religious freedom that moved him to write Rora, one of the best works of historical fiction ever written.

Leviathan is Huggins' first "man versus monster" book, and it's one of his recurring themes. In my opinion, it's where he truly shines. Huggins' other work in that genre includes Cain (1997) and Hunter (1999), both of which were optioned for film rights. Nightbringer (2004) is also quite enjoyable.

His most recent work includes Maggie Magdalene (2013) and Dark Visions (2018). These are more in the thriller-mystery category.

Huggins's Leviathan isn't perfect. Critics will find several things to nit-pick. Huggins takes a while to roll out his main protagonist. With the exception of Thor (and, yes, the character pretty much resembles that Thor), most of his characters are thinly developed. There are long passages of dialogue and exposition. Some of the technical talk gets a little tedious. Of course, fans of Michael Crichton and Tom Clancy will probably like the techno-talk. Huggins' virulent distrust of the US government is obvious and comes off as a little too heavy-handed.

Still...in spite of those flaws, Leviathan is an extremely entertaining ride. Here's a passage from Huggins' book:

"Leviathan began to awaken, rising. A thick tail uncoiled, whipping out suddenly to the rear, revealing the four long, thick-tendoned legs that ended in wicked feet, reptilian claws gleaming darkly to grapple stones softened by the unimaginable heat of its sleep. Then, from a protective position beside its chest, the long neck straightened as it stood, head rising, rising, lifting sixteen feet above the cavern floor on the armored neck, stretching. And then it lowered its head again as the malevolent green eyes opened, glowing eerily."

Yeah, one of the sentences is kind of a run-on. But if you love monster thrillers, you have to appreciate the image spun up in your mind by Huggins' prose. And it only gets better.

It is worth noting that the above scene takes place about 38% into the Kindle version of the book. Aside from a brief teaser at the beginning, the story takes a while to build up. But once it gets going...once Leviathan awakens in the scene described above...the book becomes a roller coaster thrill ride. The action at times is breathtaking. And just when you think it can't get more intense, it does.

Huggins is quite simply one of the best action writers out there. And, in my opinion, he's the best monster thriller writer ever. And Leviathan is what got him started.

If you enjoy science fiction or monster thrillers, you need to pick up a copy of Leviathan. I doubt you'll be disappointed.