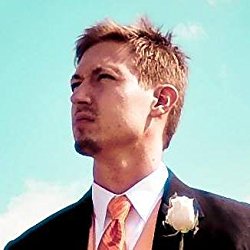 Apollos Thorne is the bestselling author of several LitRPG novels, including Codename: Freedom - Survive Week One, Codename: Freedom - The Goblin Siege, and Underwold: Level Up or Die. I had the privilege of interviewing Apollos at the time his first Codename: Freedom title was released. This interview, conducted back in July 2017, is being republished on this blog for your reading pleasure.

Brian Tubbs (BT): “Your book Codename: Freedom – Survive Week One releases TODAY. I’m looking forward to reading it. It’s in the LitRPG genre. For the benefit of some of my blog readers, can you explain what LitRPG is all about?”

Apollos Thorne (AT): Sure. That is probably the hardest question to answer that I get asked all the time. Tron is a good example. The main character is sucked into a digital world. Although a lot of authors use virtual reality because it’s becoming more and more of a reality. The only difference is that once you are sucked into this world you are able to level up to grow stronger. Just like in the common Role Playing Game. The progression of the characters is usually a major characteristic of the genre.

Another aspect that isn’t talked about as often, but is almost always present, is the competition between other players or people also stuck in the same situation you are. Not only is there the opportunity to level up and grow stronger, but to compete against others. The trailer for Jumanji 2, which just dropped on YouTube, is also a good example.

BT: “What got you interested in LitRPG as a genre?”

AT: I grew up playing games, especially role-playing games. It was always the story of these games the fascinated me. The sense of progression from leveling you character and growing stronger is also something I think really captures the imagination of guys in particular. I think it is a perfect genre to tell coming of age stories. There is also the exploration of future technology that has my inner geek dancing.

BT: “On your blog, you say you’re a fan of C.S. Lewis and J.R.R. Tolkien. Can you tell us what you most appreciate about them?”

AT: I will start with Tolkien, just because he was the cornerstone for the modern fantasy genre; especially epic fantasy. Even though I am a minimalist in my own writing when it comes to descriptions, to read Tolkien is to enter a new world. He is also a great example of what mankind is able to do with the imagination God has given us. C.S. Lewis is probably a bigger inspiration because of how he was able to mold his Chronicles of Narnia universe into something entertaining to all, but also more directly honoring to God. Also, I was able to start Lewis’s series earlier in life and stay interested.

AT: First of all, listen to your conscience. For anyone that is a new Christian… do not do anything that you are uncomfortable with just because another Christian has found liberty in that area.

I was converted while in the process of getting a film degree, so understanding where I stood in this area was something I had to figure out fast. Where you stand on any form of entertainment is probably one of the first things you will struggle with as well since it is so readily available in our culture. Don’t rush the process as God renews your mind through His word and wise counsel.

With that out of the way, fiction, regardless of the medium, is fiction, not reality. That distinction is very important. Understanding it is entertainment makes it possible to take something like Harry Potter and discern what is good and wrong about it. Yes, some people believe in witchcraft, or even take the made-up magic of Harry Potter and practice it as if it is real. They have not discerned reality.

As you grow in knowledge of Scripture and experience the philosophies of the fiction, and characters within, the idols of their hearts, and also the good and noble things in the story will become easier to spot. Self-sacrifice, heroism, love, compassion, mercy and redemption are all things that even unbelievers can understand to a certain extent and appreciate. Remember that man is totally depraved, not utterly depraved. Meaning we are naturally sinners, but by God’s grace no one is as bad as they could be. We are also created in God’s image. That makes mankind fascinating, even in his fallen state.

Albert Mohler, the president of The Southern Baptist Theological Seminary, is probably the most prolific reader I have ever encountered. Not only does he study every topic under the sun, but he also reads fiction. Now he doesn’t give recommendations, but he has helped solidify certain aspects of different forms of media in my mind. Reading, like nothing else, allows you to experience a story in an extremely intimate way and delve into the heart and mind of the characters, almost experiencing what they are experiencing and takes you on the journey with them. The emotions it can cause are evidence of that.

BT: “By the way, your first name is Apollos – the same name as one of the Apostle Paul’s ministry colleagues in the New Testament. Is that just a coincidence? or did your parents have the Apollos of the Bible in mind?”

AT: That is exactly where I got the name! A man of eloquent speech. I tease that my last name Thorne comes from Paul’s thorn in the flesh. Meaning for every ounce of eloquence He gave me to tell a story, He made sure to level the playing field. Actually the last name just sounded cool.

BT: “Tell us about your book.”

AT: Codename: Freedom – Survive Week One is the first book in what I plan to be a long running series of nine or more books. I wish they broke up nicely into trilogies, but I don’t see that happening. It is a coming of age tale where Lucius, named after the Lucius in Acts, is raised in a world where virtual, mixed and augmented reality have completely taken over everyday life.

His father is a software developer and created an artificial intelligence (AI) bot named Destiny to basically raise him in his place. She is more than that though. She is a constant voice in his head to help him develop to become the best he can be in whatever it is he so desires. Destiny is much more advanced than the regular AI bot and Lucius’s father is rather disappointed he uses her to pursue becoming a professional gamer.

Gaming at this point in time has become as big as professional sports are today, if not bigger. With enough followers you can catch the eye of sponsors and get huge contracts. Lucius is selected to enter a yearlong virtual reality experiment that is really a training simulator, "Codename: Freedom," designed to transform normal people into super soldiers. He enters Freedom to hopefully push his semi-pro status to the next level.

The leveling system isn’t like what is common in LitRPGs. It is based off of military grade Mixed Reality tech. When they level up, they can improve their senses to grow their ability of sight, hearing and smell. All combat is based off of their real world ability. Since both gamers and athletes are chosen to participate this causes some extra drama when the two different worlds clash.

I have to stop now or I’ll give too much away.

BT: “How long did it take for you to write it?”

BT: “How accessible is this story for people who may be uncomfortable with profanity, sexual content, and so forth?”

AT: There is no profanity or sexual content at all for starters. I usually use fillers that are cleaner, like “cyborg snot" for cursing. Something that is cleaner, and more humorous than cringe-worthy. That doesn’t mean I do not touch on mature topics. One of the biggest trials Lucius has to deal with is the 100% pain in Codename: Freedom. Even if pain doesn’t come paired with death, having to wait hours as you suffer through it before your body recovers is not a light topic.

If in the future there is sexual content, then I will imply and not describe it. I have never run into a book where I thought it was necessary to tell the story. Now certain genres are based upon that, but I am not writing for any of those genres.

Also, Codename: Freedom is an action novel. There is violence, but I don’t do gore. That is sometimes a fine line, but I only explain certain events if they are required to explain a tactic and that tactic is impacting the mindset of the character.

Drinking. This is something that is done in Codename: Freedom. I have tried to do it tactfully, but everyone is of age. Secondly, it is not praised. A drunk person is thoroughly mocked in Book One as example. Also, one of the ways it is used is to numb pain while people are suffering from an injury because they have found nothing else that works.

BT: “Have you always wanted to be a writer?”

AT: I have always like the idea, and in college I wanted to pursue it. It wasn’t until after college and I was married that I just started to do it for a hobby that things became series. I put up the rough draft of Codename: Freedom on RoyalRoadL.com and got 500k views. After that it seemed silly not to pursue it.

BT: “With LitRPG, you not only have to deal with plot and characters, but also with creating a game world and dealing with game mechanics, character stats, and so forth. Did you design the game before you wrote the book?”

AT: Yes. I also have a second series with a completely different game system coming out hopefully in 2-3 months. This is an aspect I get a kick out of. It’s the gamer in me. Growing up playing games is good for something I guess.

BT: “I’m assuming you plan to follow up with Book Two** at some point. Do you have the series all laid out? Or are you letting things unfold as you go???

AT: A little bit of both. The overall plot over the nine or more books is already outlined. The individual books are only partially outlined. Besides book two that is already written, each individual book I experience for the first time while I’m writing it. There are a few major scenes I have probably already imagined, but other than that the characters do what they want. Lol.

I wanted to thank you Brian for the opportunity and showing the LitRPG genre some love. I hope you continue to enjoy the genre!

**Note: Since this interview was originally conducted, Book Two has now released. Look for it on Amazon at Apollos Thorne's author page.
Posted by Brian Tubbs at 12:42 PM