An Alchemist Takes on a Bully and Wannabe King: My Review of the LitRPG novel Unwritten Rules 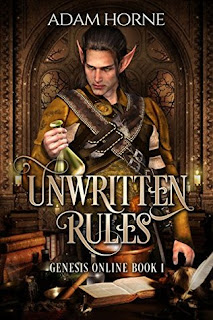 While in college, Kevin’s life took a tragic turn when a car struck him and left his body paralyzed. Two years later and still deeply depressed, Kevin is given the opportunity to play a revolutionary computer game – an immersive MMORPG (massive multi-player online role-playing game) called Genesis Online. It’s a game backed by a ground-breaking, state-of-the-art artificial intelligence (AI). He soon finds himself reborn (or at least reimagined) as Kelath, a rogue adventurer in an exciting medieval fantasy world.

Kelath’s excitement turns to anger and frustration when he runs smack into a corrupt guild ruled by a wannabe king named Itrix. The guild, Noblesse Oblige, seeks to dominate all of the Genesis world through extortion, violence, and intimidation. Kelath and his friends must rally together, form their own guild, and fight for the freedom of Genesis.

If you don’t like fantasy stories or role-playing games, you probably won’t enjoy Unwritten Rules. But, in my case, I found Unwritten Rules to be rather entertaining. The first few pages may be a little slow for some, but it gets you into the main character pretty well. Then, when he puts on the gaming gear, the LitRPG story gets going and draws you in. It’s not as heavy on the LitRPG elements as some other novels in this genre, but the story and characters are pretty well fleshed out. Horne definitely succeeds in getting you to root for Kelath and his friends.

The initial premise may be troubling to some. On the surface, it may suggest to some that disabled individuals lack purpose, and need something like the fictional MMO in Unwritten Rules to give them purpose. As someone who has a mentally challenged sister and who has worked with members of the disabled community (both as a pastor and, several years ago, on my county’s Disability Services Board), the value and dignity of persons with disabilities is an important issue for me. Nevertheless, as sensitive as some readers might be to the story’s premise, it is not the author’s intention to suggest that those with disabilities need virtual reality to give them purpose. The author is simply laying out the story of this one character, Kevin, and letting us go on a journey with him. When I reached out to the author on this subject, he was happy to confirm this. As he explains, “What Kevin needed most in his life was a way to feel like he was contributing, and that could have been done in any number of ways: a job, volunteering, outreach programs to mentor other people with disabilities. That’s what I saw as his purpose, and the game was the perfect tool to help him achieve it.” (My full Q&A interview with the author will be published in a few days.)

I plan to continue with this series. And if you at all like fantasy and/or RPG games, I suggest you give Unwritten Rules a try.
Posted by Brian Tubbs at 4:44 PM