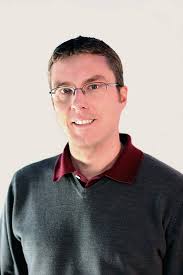 Adam Horne’s Unwritten Rules is a fantasy LitRPG novel available on Amazon Kindle (free if you have Kindle Unlimited). Last year, I read the book and wrote a review (published originally on a different blog - recently republished here). And I reached out to the author with a few questions, and he was kind to get right back to me. With his permission, I’m posting the interview below.

BT: I really enjoyed Unwritten Rules. How did you discover the LitRPG genre and what made you decide to write in it?

AH: I read Ready Player One. And by read, I mean I put it on my Amazon wishlist, ignored it for 3 years, then rediscovered it and wished I’d picked it up when I first saw it. From there it wasn’t hard to find links to similar books, and I tried several different series, including The Land, Awaken Online, Caverns and Creatures, and some translations of the Russian books. I’d played RPGs, both tabletop and video games, for over 20 years, and I’d also just finished writing my second book, which was a young adult science fiction novel. I wanted to work on something new and LitRPG was a perfect fit for my interests both as a game player and a writer, so I began outlining the story that became Unwritten Rules.

BT: The main character is a disabled young man struggling with depression and looking to find a purpose in life. There are some who may think the novel insinuates that disabled individuals need a virtual reality game to give them purpose. I know this isn’t your intent, but wanted to ask if you could comment on that.

AH: Sure. I always looked at Kevin’s condition as having less to do with his physical circumstances and more to do with his outlook in the aftermath of the car crash. At any point, he could have worked with his new limitations to create a purpose in his life. He had a motorized wheelchair that would have given him the mobility needed to socialize or hold a job, and he had parents and friends willing to support him in his goals. He just needed to make the decision for himself, which isn’t an easy thing to do when suffering from depression. What Kevin needed most in his life was a way to feel like he was contributing, and that could have been done in any number of ways: a job, volunteering, outreach programs to mentor other people with disabilities. That’s what I saw as his purpose, and the game was the perfect tool to help him achieve it.

BT: How did you go about this aspect of developing Kevin as your protagonist?

I don’t have a disability like Kevin’s, so I’ve had to research quite a bit in order to write it. The psychology behind how people change after a traumatizing event kind of surprised me. Many people in Kevin’s situation report that after they come to terms with what happened to them, they feel a deep sense of gratitude for things they used to take for granted. They’re happier afterwards and wouldn’t trade the sense of well-being they’ve discovered for going back to the person they were before. I plan to include more about how playing the game helps Kevin regain some of the physical mobility he lost and how it affects him emotionally and psychologically as well. Hopefully my writing skills are up to the challenge of handling it in a way that is sympathetic towards people with disabilities.

BT: With LitRPG, you’re not just dealing with characters and plot, you have to immerse them in a believable game world and track their progression through that game world. Did you design the game before you wrote the story?

AH: I did a lot of design work before I started writing. I wanted my characters to overcome their problems through strategy rather than being overpowered, something I see a bit too often in LitRPG stories. I felt the more I knew about the game and how it played, the better I would be able to write the story. I knew the skills and powers, leveling system, character classes, death mechanics, and all the ways the AI worked in the background before beginning chapter one. I had to make some changes as I went along, but having all that figured out in advance meant I could focus more on the storytelling as I wrote.

BT: How did you track character stats?

AH: I use a program called Scrivener to help with my writing. It lets me add notes to each chapter, so I kept track of stats that way. Honestly I could have been a lot more diligent about tracking and showing stats, but I tend to concentrate more on the story. When I read LitRPG, I usually skip over the points when an author shows the entire character sheet anyway, especially if they’ve already been individually reporting when skills and attributes increase. I plan to be more diligent in reporting those values in the next book.

BT: I’m sure many readers (like me) want to know when we can expect Book Two.

AH: At the moment, I can’t say when book two will be ready. It took approximately four months to write Unwritten Rules, but I’m hoping I can work faster this time since the game world has been established. The outline is mostly done, and I intend to release chapters on a weekly basis on Royal Road once I start writing. If you want to include a link to the story page, I will be updating it with information as the book progresses.

BT: Thank you for your time, Adam. I know my blog readers will appreciate this interview. Blessings to you and your efforts.

AH: Thank you for including my book in your blog, and I am glad you enjoyed it.