Why I Love Watching, Reading, and Writing Fantasy & Science Fiction: Blame my Father 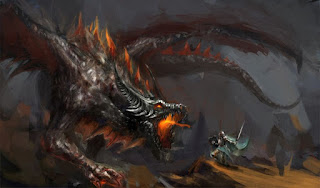 Most of you know me as a Christian and as a pastor, but not all of you know that I'm a fan of fantasy and science fiction. You can blame my father for that.

As I write this, we’re heading into Father’s Day Weekend 2018. And I’m thinking of my late father, Edward Tubbs. One of the many things we did as a father and son was come up with stories together and create our own games. We both loved history, science fiction, and fantasy. And I have many fond memories dreaming up various story ideas and making up our own games - and then playing them.

In one particular game, we had medieval soldiers, castles, dragons, and wizards. I remember it well. We’d dream up the rules, play out our game to see if the rules worked, and tweak things as we went along. And on a least a couple occasions, when I’d start winning, Dad would want to change the rules. :-).

My dad raised me to believe in God, love Jesus, and respect the Bible as God’s word. And it frankly irritates me that some Christians would think we were doing something “demonic” or “sinful” in those harmless father-son games because, in at least a couple of them, we had wizards and dragons! Or because Dad tried to get me to read The Lord of the Rings books (and I sadly never did -- but I love the movies! :-) ).

And yet many Christians are indeed that way. And would indeed say those things.

I still remember when the first Star Wars movie came out. I loved it! My dad loved it! It was something that he and I bonded over. He took me to every one of the original trilogy movies. And he and Mom bought me some of the Star Wars comics when they came out. And I remember taking one of those comics to school one day (I went to a private Christian school) and being told by my teacher that Star Wars was “of the devil.”

Of the devil? Seriously!?

My dad was helping me celebrate something that was "of the devil"?!

For my third grade mind, that just did not compute. And, honestly, it doesn't compute for my 48 year old mind either.

As I explained in my article “Christianity and Fantasy: Is it Wrong to Read Fantasy Literature,” (which you can read here), I love reading about dragons, monsters, wizards, Jedi, sword fights, epic battles, and more. I have for years. And...

That's right. I'm an evangelical, Bible-believing, Christ-loving, Baptist pastor AND I enjoy fantasy and science fiction.
Not all Christians will understand or appreciate my "entangling" myself with sci-fi and fantasy entertainment, but let me reiterate: Even though I enjoy fantasy and science fiction, I still...
Perhaps you see an inconsistency or problem there, but I respectfully do not.

And neither did my father.

The Bible certainly condemns “mediums,” “necromancers,” and “sorcerers” (see Leviticus and Revelation). But these passages very specifically refer to individuals consorting with actual witches and demons. These passages are not talking about Gandalf in J.R.R. Tolkien’s The Lord of the Rings or even the main protagonist in I Dream of Jeannie.

It’s important that Christians exercise some discernment, and it troubles me when Christians have a knee-jerk, judgmental reaction to things without taking the time to understand those things.

If you’re going to judge a fictional depiction of magic, it’s important to at least understand that fictional depiction. You don’t just look on the surface and say “Magic? Sin!” What’s the SOURCE of the magic in the story?  THAT is important, because THAT is why the Bible condemns those who were engaged in sorcery in Bible times. Their source of power was demonic. And thus the Bible understandably and rightly condemns them.

If a work of fiction glorifies or celebrates Satan or demons as a source of power....stay away. But this is not the case with Star Wars, The Lord of the Rings, I Dream of Jeannie, or The Wizard of Oz.

Frankly (and please don't brand me a heretic here, my fellow Christian), it's not even the case with Harry Potter either. (Picture me ducking to avoid incoming objects). Contrary to what some uninformed, yet quite vocal, Christians have to say, Harry Potter does not glorify Satanism or the worship of demons.

This doesn't mean I fully endorse Harry Potter. I do not. While most of Harry Potter is fictional, fanciful, and completely harmless, there are nevertheless some actual occult practices woven into the story, which should obviously raise serious concerns for Christians. For a more complete examination of that, I refer you to Marcia Montenegro's review of Harry Potter.

Marcia is the founder and head of a wonderful ministry called "Christian Answers for the New Age." I don't agree with Marcia on everything, and I know she won't agree with all of what I wrote in "Christians and Fantasy: Is it Wrong to Read Fantasy Literature?" And she probably won't approve of my writing fantasy stories either. Nevertheless...

Unlike many in the Christian community who have a knee-jerk, judgmental reaction against all things fantasy, Marcia is thoughtful, reasonable, and informed. She has a lot of great information to offer the discerning Christian. And she makes excellent points about the Potter movie and book franchise. And as a former astrologer and New Age practitioner (and now Christian missionary), her expertise on such matters is worthy of attention and respect.

I appreciate those Christians who take a cautious (even if, at times, overly cautious) view of entertainment that deals with wizards and other magic-wielders. And if YOU feel God is leading you not to read or watch science fiction and fantasy at all, I respect that. I do.

But I hope you will respect people like my dad and me who did not believe God was leading us to avoid all fantasy and science fiction. I hope you can respect that we made different choices. Not that we endorsed all entertainment choices, and certainly not all fantasy entertainment. That's not what I'm saying and it's not what my father taught me. Rather, I believe a Christian can and should exercise discernment. And that is what I'm defending.

It was, after all, the late (and indeed legendary) J.R.R. Tolkien who wrote: "Mythology is not a disease at all, though it may like all human things become diseased." Fantasy fiction is not inherently corrupt or sinful, but like anything, it can become so. This is why discernment is key.

Let me repeat: Fantasy, in and of itself, is not sinful. It is simply a part of the human imagination - something that should be encouraged. For as Tolkien himself wrote: "Fantasy remains a human right: we make in our measure and in our derivative mode, because we are made: and not only made, but made in the image and likeness of a Maker."

Email ThisBlogThis!Share to TwitterShare to FacebookShare to Pinterest
Labels: open letter to my christian friends, why i love science fiction and fantasy, why i love watching reading and writing fantasy