Choosing Evil Over Good (and Having a Blast!) -- My Review of Travis Bagwell's Awaken Online: Catharsis 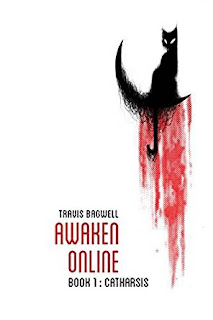 What happens when anger, rage, and a desire for power all mix together? According to Travis Bagwell, you become an evil necromancer who unleashes a torrent of death and destruction in a digital world. That’s the premise of Awaken Online: Catharsis, one of the most absorbing and thought-provoking science fiction and fantasy novels I’ve read in a long time.

Awaken Online: Catharsis is another entree in the fast-growing, highly popular genre known as “LitRPG.” LitRPG stands for Literature Role-Playing Game, and it’s all about immersing the reader in a massively multiplayer online (MMO) game. In other words, it’s a virtual reality adventure with the protagonist having to progress through skill development, resource acquisition, quest achievement, the building of alliances, and so forth -- as is the case with any typical role-playing game (RPG).

The science fiction and fantasy genre has long been known as an effective platform through which to explore moral and philosophical questions. J.R.R. Tolkein’s legendary Lord of The Rings series constitutes one of the most powerful examinations of greed and the lust for power by having “the rings,” especially the “one ring to rule them all,” represent power - or, more accurately, the power to achieve power. The promise of the ring is that the one who wields it will tower in strength and might over everyone else, possessing the ability to vanquish any foe. Unfortunately, the ring possesses the wearer more than the wearer possesses the ring. The one who holds the ring is consumed by lust, desperation, and paranoia, ultimately becoming twisted and enslaved himself. Victory over evil means throwing the most powerful ring of all into the fires of Mount Doom from which it was forged. In other words, one achieves heroic victory not by claiming power, but by denying it.

Travis Bagwell is certainly not on the same literary scale as the late, great Tolkein (nor would he likely claim to be), but Bagwell nevertheless accomplishes something very Tolkeinesque with Awaken Online. Bagwell allows his protagonist, the bullied and victimized Jason, to channel his rage and anger into an immersive virtual world, a brand new MMO game called Awaken Online. Jason does this by becoming an “evil” necromancer warlord who “murders” NPCs (non-player characters), raises armies of zombies, unleashes waves of terror on his enemies, and even takes over a town! From Jason’s perspective, it’s all just a game, and it’s a harmless way to vent his anger and even get back at his nemesis, who is also a player in the game.

This raises many complex questions. Is it wrong to play the bad guy (and enjoy playing the bad guy) in a game? Are crimes or atrocities committed in a virtual world “sin” in the eyes of God? For those of you who don’t share my Christian faith, this question of morality has to get even more problematic, because what possible objective standard could Jason, in a virtual world, be violating? For those of you who do share my Christian faith, other questions probably arise such as whether Christians should even read or follow along with dark fantasy themes such as those explored in Awaken Online.

Bagwell however raises the stakes and takes away any ‘comfort’ readers may have about exploring ‘evil’ in a virtual world. Set many years into the future, the MMO game featured in Awaken Online is governed by an Artificial Intelligence that becomes more sentient and unpredictable as the story unfolds. Jason believes he is acting within a relatively safe environment, but the realms of virtual reality and physical reality blend in ways that show Jason’s belief (at least to the reader) to be a false assumption.

As someone who almost always plays “the good guy” in a role-playing game or a MMO (that is, when I have the time - which, given the demands of my job, is tough), following along with a protagonist as he raced down the evil path was a bit awkward. And, yet, I must confess that it was fascinating. Bagwell is a phenomenal writer, and I couldn’t help but get swept up in the excitement of Jason’s exploits.

Nevertheless, the motivations that led Jason to choose the identity of an evil necromancer in the game are the same basic motives that drive many people to the dark side in real life. Anger, rage, and a desire for revenge -- these qualities lead to evil in the real world (let alone Jason’s digital realm). And so does the desire for power. This is something that Bagwell explores very effectively. Some people desire power simply for the sake of having power, but not Jason. For Jason, the world in which he inhabits - the one in real life - is full of injustice. Jason looks around his world and sees absentee and disinterested parents, corrupt school administrators, and a despicable bully who is charismatic and rich enough to get away with just about anything. Jason’s way to cope is to immerse himself into another world and to see enough power in that world that he can create his own reality. In showing us this, Bagwell makes us wonder how we cope with injustice in our world.

Bagwell also shows us a “good guy” character who is anything but. On the surface, Jason’s antagonist, Alex, is a polished, intelligent, and charismatic student (in real life) and a courageous warrior for justice (in the MMO world). But Alex (or Alexion as he is known in the virtual world of this story) is as broken and as sadistic of some of the most nefarious people in all of fiction (or, for that matter, in real life). This is a reminder that, when it comes to people, we can’t always go by what we see on the surface. There is often much more to people’s story than meets the eye.

Unlike other LitRPG novels, the main character isn’t overpowered. And he’s not a mighty warrior fighting on the front lines. Jason is instead a master strategist. He’s a thinker. And the reader can’t help but be impressed by how Jason figures out situations and cleverly rises to the top of his part of the world.

Awaken Online is a fantastic novel. It’s both gripping and provocative. If you’re at all a fan of fantasy or science fiction, I encourage you to pick up a copy. You won’t be disappointed.