A US Navy Destroyer Battles an Evil Reptilian Race in an Alternate World: My Review of Taylor Anderson’s Into The Storm 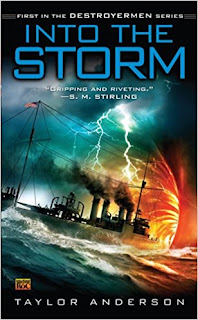 Taylor Anderson’s Into The Storm, the first book in his exciting Destroyermen series, opens with the US Navy losing World War II. Badly. Three months after the Japanese attack on Pearl Harbor, the US Navy is unable to stop the Japanese as they sweep across the Pacific Ocean. Having suffered a disastrous defeat at the Battle of the Java Sea, American ships are fleeing, in Anderson’s words, “the implacable juggernaut that was the Japanese Imperial Navy.”

The retreating American vessels include Destroyer Squadron 29, a group of aging destroyers from the Great War era pressed back into service for what is now the Second World War. One of those destroyers is the four-stacker USS Walker, commanded by Anderson’s main protagonist, Lieutenant Commander Matthew Patrick Reddy, USNR. As the Japanese fleet presses forward, Reddy takes his vessel into a squall hoping to escape certain destruction. When they emerge from the squall, they are in an alternate world with dinosaurs, monstrous fish, and a savage reptilian species descended from the velociraptor. Thus begins Taylor Anderson’s magnificent Destroyermen series.

Taylor Anderson is a historian, gun maker and forensic ballistic archaeologist. He’s been a professor, museum advisor, and Hollywood consultant. He’s even acted himself in movies. Published in 2008, Into The Storm was Anderson’s first novel and the first in the Destroyermen series. He’s now a New York Times bestselling author, having written eleven volumes in the alternate history series.

The Destroyermen series is reminiscent of the phenomenal Lost Regiment series by William R. Forstchen, in which a Civil War Union regiment from Maine is mysteriously transported to a different realm and must fight for its own survival as well as for peace and justice in its new world. The difference of course is that Anderson emphasizes naval warfare whereas Forstchen focused on land. Though, it should be noted that both land and sea battles are featured in both series. And both series are excellent.

Anderson’s Destroyermen series appeals to fans of portal fiction, alternate history, nautical fiction, military sci-fi, and fantasy. Those who appreciate complex worldbuilding and, at times, intricate technical details will likewise be impressed. The characters are all pretty well developed, and the action scenes are gripping.

If you’re a fan of William R. Forstchen, S.M. Stirling, or Eric Flint, you should give Taylor Anderson’s Destroyermen series a short. And it all starts with Into The Storm.