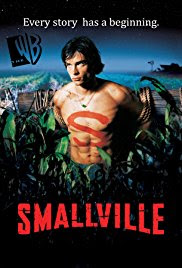 Growing up, I was a huge Superman fan — just as I’ve long been a fan of science fiction, fantasy, and superheroes in general. So, when Smallville aired for the first time in 2001, I should’ve been glued to the TV. But…I wasn’t. For whatever reason, I ignored the series for years. And then, sometime in 2004 or 2005 (I can’t remember exactly when), I started renting DVDs from Season 1. (This was before online streaming took off). And I was hooked. I binge-watched my way through the first few seasons, finally catching up to where Smallville actually was. I’ve been a fan ever since.

For those who may not know, Smallville was a TV series about Clark Kent before he became Superman. It starred Tom Welling and ran from 2001 until 2011. The series starts with Clark as a high school freshman and continues forward as he discovers, understands, and develops his abilities. It’s a great concept, though it requires some suspended disbelief to accept Tom Welling, at the time in his mid-twenties, as a 9th grader. The series follows Clark through high school, then college, and then his early career as an entry-level reporter for The Daily Planet. While the series does a halfway decent job keeping Clark and his friends oriented to high school in the first few seasons, the whole college thing is almost ignored. One wonders, in fact, if Clark ever attended any classes!

Some of my readers may not appreciate superheroes or science fiction as much as I do, but Smallville contained some great life lessons that should resonate with all of us. Like just about anything, you have to be discerning. And for the discerning viewer, there were some terrific gems of wisdom — some wonderful life lessons — in this Superman origin TV series.

As a Christian (and those of you who don’t share my faith may want to skip this paragraph), I obviously can’t endorse all the content of every episode. It starts off as a moderately kid-friendly show, but as the series progresses, it gets more “adult.” Some episodes get a little racy, with revealing outfits, lots of drinking, and some characters engaging in casual sex. Some Christians will understandably want to avoid any such content. Others will see it as merely reflective of society overall and look past the objectionable parts to enjoy the good aspects of the program.

I would simply caution you to be discerning and to (as always) make entertainment choices that would not cause anyone (including yourself) to stumble into sin. Speaking for myself, when it comes to entertainment choices, I balance things out on a proverbial scale. And, in my judgment, the good outweighs the bad with Smallville, but I respect those who may come to a different conclusion.

Either way, few can argue that TV shows (as well as movies and books) sometimes contain some inspiring moments or meaningful lessons. And that’s certainly the case with Smallville. So…without further ado, here are some powerful life lessons from Smallville:

While Clark is trying to keep his identity under wraps and his alter ego’s image (at this point, as “the Blur”) well managed, he comes face-to-face with a flashy, camera-loving superhero named Booster Gold. The episode juxtaposes Clark’s choice to shun the limelight with Booster’s hunger for it. Clark actually begins to diminish his reputation as (well) Clark by transforming himself back into a mild-mannered, socially awkward, and utterly forgettable bystander. By contrast, Metropolis’ newest arrival seeks all the glory he can achieve and presents himself as the city’s new savior (and the Blur’s replacement).

As the episode progresses, Clark learns that Booster came from the future thanks to a Legionnaire’s ring, which he probably stole.  And then Booster messes up a rescue which accidentally leads to an uncontrollable monster threatening the city. And it’s Clark who must pick up the pieces and make things right.

The episode provides a solid lesson in humility, patience, and character. And Clark gets to explain that suits, costumes, and public relations campaigns don’t make heroes. As he explains, “A hero is made in the moment, by the choices that he makes and the reasons that he makes them.”

During the Smallville series, Clark (as well as his cousin and a couple friends) spend some time in the Phantom Zone, a lawless and nightmarish abode where Krypton exiled its criminals. In this episode, one of Clark’s friends, Raya, escapes to Earth and comes to visit him. Unfortunately, she isn’t the only one who came to Earth. An evil spirit escapes the Phantom Zone with her and soon inhabits the body of a street kid and comes looking for revenge.

I won’t elaborate any more or risk giving spoilers, but Raya says something in the course of the episode that rings true for all of us. Pain is indeed part of life’s journey. And, try as we might, we can’t escape it. Not in this life. How we deal with that pain fashions and reveals our character.

“Call me crazy, but I’ve always been a firm believer that beauty-it’s on the inside.” -Lois Lane, Season 4, Episode 3 “Façade”

This episode explores what it means to be cool, attractive, and popular – things teenagers (and many adults) wrestle with a lot. Against his father’s wishes, Clark tries out for the high school football team, while a former acne-ridden teenage girl returns from summer break looking fabulous. Her secret? Plastic surgery with a little Kryptonite mixed in.

As one who struggled with acne as a teen and with self-esteem issues for many of my teen and young adult years, I can relate to this episode. And I agree with the lessons it tries to convey. Resorting to desperate, dangerous, or unhealthy measures may give you a temporary boost in confidence or even enhance (for a season) your appearance, but they risk damaging you and others at a level far deeper and of much greater significance.

When it comes to looks, talent, and abilities, people come in all shapes and sizes. But everyone, regardless of appearance or personality, can be something special and make a unique, positive, and meaningful difference in the lives of those around them. To do this, we must pay more attention to what’s on the inside than what’s on the outside.

Sometimes, the bad guys have the best lines. And sometimes, at least when it comes to specific things said, the bad guys are correct. This is one of those times. Zod reminds us that the truth will eventually come to light.

The episode features zombies. That’s right, zombies. Someone in the Smallville writing room must’ve said: “Hey, we need zombies. What could be cooler than Superman vs. zombies?” That’s probably how we got “Rabid” as a Smallville episode.

A virus is unleashed on Metropolis turning its residents, including our beloved Lois Lane, into an out-of-control, rabid zombie. It’s up to Clark to (once again) save the day. Which, of course, he does. Sorry for the spoiler, but back to the lesson…

The truth is something that people will often try to hide from, deny, avoid, or redefine. We see this in the news all the time. We see it in the entertainment world. We see it on social media. We see it in our families. We see it in ourselves. We often don’t like the truth. We often, to steal Jack Nicholson’s line from A Few Good Men, “can’t handle the truth.” But…the truth is always there. It’s objective. It’s persistent. And it must eventually be confronted.

Smallville is a great show. I wish they’d do a sequel show called Metropolis with Tom Welling playing as our hero Superman, but this is unlikely given the CW’s current-running Supergirl (which features a different actor for Superman) and the movie franchise which started with Man of Steel and continued with Batman vs. Superman and Justice League. Still, whenever I get a little nostalgic for Welling’s Clark Kent, I can always fire up an old episode of Smallville and enjoy it. And, with some episodes, I can also learn some important life lessons.
Posted by Brian Tubbs at 2:38 PM